Australian Ranches -- A great resource for learning: The trainee herdsmen and women or Jackaroos and Jillaroos are given hands-on training. 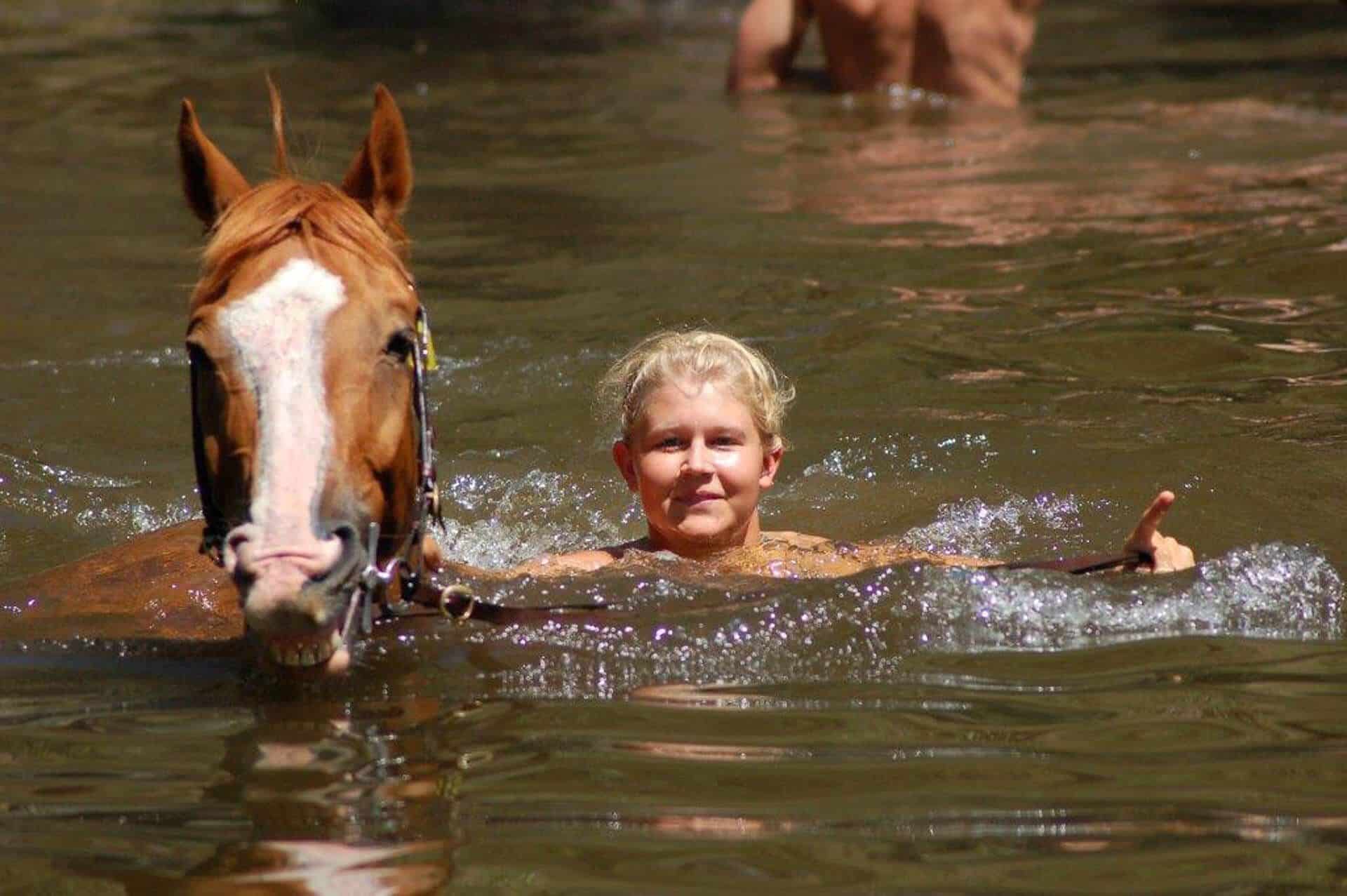 Information about the Jackaroo Jillaroo Program

All evenings are around the campfire with open-air camp oven cooked meals.

To book in, just send us an email with your name, level of riding experience (beginner 0-10hrs/intermediate 10-100hrs/experienced 100+hrs) and the date you are after, if there is space we write you in! Your booking is confirmed once we receive your deposit.

The minimum age for participants on the School is 18years old, however children 12 years and older can participate with a guardian.

The School fee is inclusive of pick-up and drop-off from, all food, accommodation and activities while at the farm.

A deposit of 200 AUD is required within two weeks of your booking and the rest is paid on arrival at the farm in cash (we have no card
facilities!).

If you don’t have work clothes: we go to a second hand store on Monday morning.

At the school you can borrow boots.

Reserve your space in an upcoming classes

Who can Apply for Jackaroo Jillaroo Training?

Any youngster who wants to enjoy the rustic life at the ranch or farm can apply for Jackaroo and Jillaroo training session. Travelers, who love backpacking to Australia or check out the natural habitat at Australia’s outback areas, often go for these classes. In case you want to pep-up your career in animal care, animal husbandry, or farm care, a practical hands-on application provided in such schools give aid in your learning.

Australia has the natural habitat and the culture to meet the needs of Jackaroo and Jillaroo. Fun jobs, entertainments, and an exposure to the unspoiled yet domesticated world, Australia offers a scope to educate interested students to learn the art of living in the bucolic world.

…So, are you ready to taste the rustic life at the ranches? Get ready with tight figure-hugging jeans, long-sleeved shirts, and an Akubra hat for a satiating session at Jackroo-n-Jillaroo curriculum at Australia outback.

What is it like to be a Jackaroo or Jillaroo in Australia?

The vast outback in Australia offers a great opportunity for animal husbandry and farming. No wonder, many ranches have come up in this area and have been flourishing ever since the area was inhabited by humans. If you want to etch out a career in managing livestock, especially with horses, it is essential to know the skills to manage such domesticated animals.

From horse-riding to milking, fencing, and roping, there are scores of skills required for horse-riders, stockmen, and stock women. The trainee herdsmen and women or Jackaroos and Jillaroos are given hands-on training to muster herds of cattle and sheep, enjoy Natural Horsemanship with the stallions and foals, get a feel on the life in the ranches, and enjoy the countryside of Australia.

Farming Career in Australia
At an Australian outback area, a trainee cowboy or cowgirl will be taught how to perform:
• Mustering of cattle, sheep, and foals
• Sheep shearing – provided the time is ripe for the same
• Fencing, yard building, roping, lassoing, whip cracking, and campfire events

…And, a special session is done to deal with horses, such as horse riding, horse-breaking, horse shoeing, swimming with horses, handling foals, and working with young horses at the stable. Many would learn to work with working dogs at the farms. For those interested in cattle farming, could learn cattle-wrestling and cattle branding. Often, a longer Jackaroo and Jillaroo teaching session would allow avid learners to pick up “horse-whispering” technique.

The environment is a very important factor in Jackaroo and Jillaroo training. The culture allows girls and boys to work the entire day and enjoy a satiating dinner out at the campfire.

For instance, a trainee stockman or women would be:
• Given accommodation that is similar to those available at a ranch.
• Provided with a multi-sitter station
• Supplied with bedding to spend a night out in the open
• Offered practical Hands-on Workshops

During Natural Horsemanship learning, a Jackaroo or Jillaroo would be taught how to care and respect animals, such as horses. From cleaning hooves, to grooming various body parts of the horse and removing saddles, the trainee cowboy or cowgirl would be given a first-hand experience on the job work.

Once the horse is cleaned and stroked, the learner would learn how to:
• Mount
• Dismount
• Trot with the horse
• Get the horse to obey rules
• Gallop through horse trail

Cowgirls and cowboys would also take turns to learn the skills of Natural Horsemanship. They’d learn to use lassos or fix fence. From Country Music Capital of Australia, Tamworth to Garrawilla near the Gwydir River, there are various schools just for producing qualified Jackaroos and Jillaroos.

Jackaroo Schools across Australia prepare willing workers on organic farms – Wwoofers -- for life in the Outback. Conny Kaufmann took the 11-day course to wander in the footsteps of Australian hit TV show “McLeod’s Daughters” and find out just how hard the cowboy life really is.

My alarm rings at 5am, but instead of jumping under the shower, I jump straight back into my dirty jeans and top.

My mud-encrusted boots are waiting outside the old homestead’s door. It’s my turn to yard and milk the two dairy cows so that my fellow Jackaroo and Jillaroo students have milk for breakfast. By 6.30am, we are in the horse yards, getting ready for another hot and long day on the farm. The shower will have to wait.

The horse I ride for the duration of the course is a feisty grey one called Ralph. Col, our coach and Leconfield’s overseer, gave us our horses according to our riding abilities. My 10 years in the saddle are of advantage, but some of the others have never been on horseback before. We are 24 wannabe Jackaroos and Jillaroos on Leconfield, and most of us are European and on a Gap Year. There is just one Australian among us, who wanted to “go bush” for a while.

Our days start early on the farm, and since Leconfield is a working cattle and sheep station, we all have to help run the farm. Set in 4,600 acres of New South Wales countryside, about an hour away from Tamworth, the homestead looks tiny compared to the vastness of the surrounding hills covered in scrubs and dried-up grass. The house itself is surrounded by horse yards.

It only takes Col a few hours to get the beginner riders ready to survive a full day muster, while his wife Kat teaches the rest how to catch a log of wood with a lasso. I soon learn that you have to move your wrist just right and fast enough for it to work and could have sworn that the log moved every time I tried.

Mustering on horseback is the only possible way on Leconfield as the terrain is too stony and steep for vehicles and bikes. Therefore, we are out and mustering 100 cows on the second day already. It’s a test of communication and coordination, as well as for our vocal chords, as we have to make a lot of noise to keep the cattle moving in front of us. Soon enough, we sound like we’re on a pub crawl, singing and shouting gibberish at the top of our lungs.

Although the official trainer on Leconfield is owner Brian Skerrett, he seldom interacts with us. Col trusts us and our abilities enough to take us on an all-day muster, to get the cattle herded and loaded on the truck for a big sale. Brian however is of little faith, and arrives with the truck – and our lunch packs and water – an hour after we’ve finished herding, and separating the heifers from their mothers. He spotted a few strays on the way down the paddock, and sends me and a British lass called Natasha to round them up.

After eight hours in the saddle, all of us are glad to get back to the homestead, although we saw a few fences on the way back that will need to be repaired soon. The McLeod girls made farm work look easy and idyllic on TV – but I can guarantee they too had sore muscles every night.

Never skipping a beat, Col turns fencing into a lesson for us. 100 metres of straight fence, uphill and build from scratch. We’re not allowed to wear our cowboy-hats while riding, instead it’s shiny white helmets for us because safety always comes first. We’re glad we’re wearing our hats though, because the sun in the bush knows no mercy.

Getting off the horses for a day was especially appreciated by the cowboys, and it finally gave us a chance to take in the spectacular scenery. On a muster you concentrate on the horse and on your task. From the ground, we actually noticed the kangaroos jumping across the paddocks.

Farm work never stops, but that doesn’t mean you can’t have a bit of fun while you’re at it. Col shows us how to throw calves – that is to pick them up and throw them on their side so they can be branded and tagged for identification. And while we’re at it, we have to castrate three bulls as well. Col is definitely having a bit of a chuckle, seeing us chasing the young bulls around. It’s amazing how fast you have to be once the bulls are on the ground.

One person tags, one brands and one castrates, all at the same time, and it’s over in seconds – and then you yourself have to be pretty quick to jump out of the way and over the fence, as the now-steers do not like you anymore.

It’s a dirty and smelly business – definitely not for city princesses – but if you think cows smell, wait until you’ve worked with sheep all day. The muster was not as smooth and tranquil as usual, as one of our horses collapsed and died on our way across the paddock while we were rounding the sheep up. We even performed CPR, but there was nothing we could do. When we finally got the mob back to the shearing shed, Col, who would describe himself as “one tough mother” was still in tears. After all, those horses are his best mates.

By now we know the drill, so we start sorting the lambs out for castration by ourselves. And while all of us would definitely use a knife for the castration, Col did it with his teeth – followed by a 24-fold “eeewwww!” Delighted to get out of the midday heat, we can’t get into the cool and dark shearing shed fast enough. I am grateful for the invention of electric shears; although I still ended up sweaty, hot and covered in wool and grease.

“Beer o’clock” can’t come too soon when you work on a farm. At the end of the day, all you want is a cold shower to clean yourself up, and a cold drink to kick back with. Showers are wasted in the mornings, if you are going to get dirty during the day.

Becoming a Jackaroo or Jillaroo is probably the most challenging but also the most rewarding course you’ll ever do. Just don’t be afraid to get your hands dirty in the process. 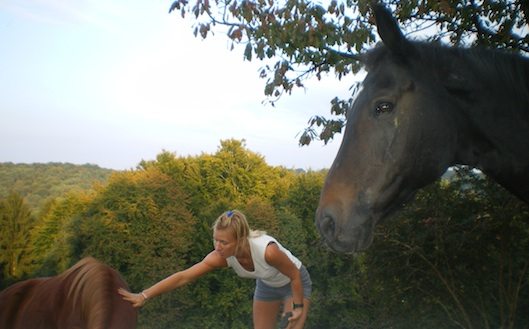